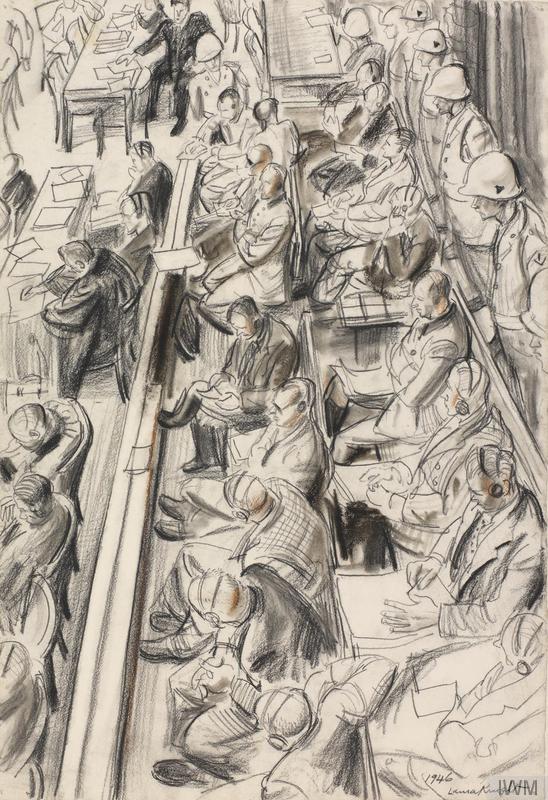 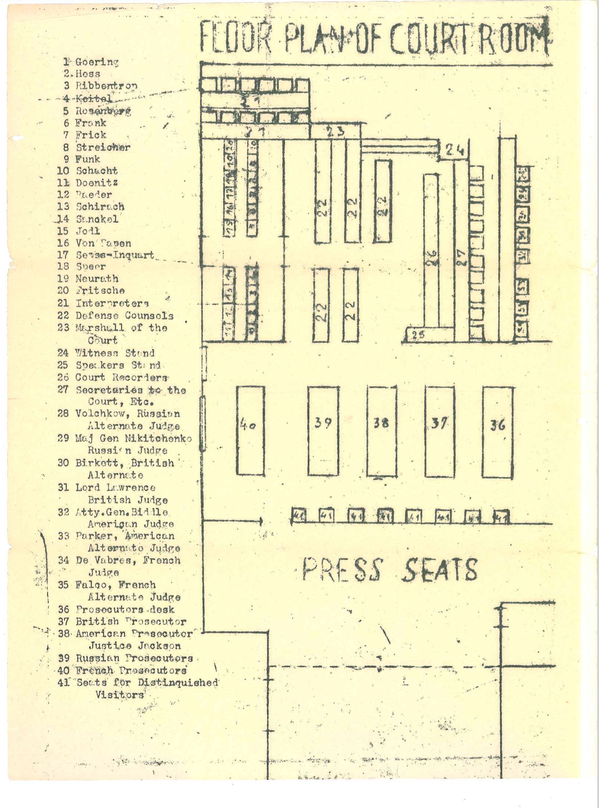 From The Course of My Life, by Edward Heath:

I looked towards the dock. In two rows they sat: Goering, reduced to wearing a plain, ill-fitting grey uniform—no medals now—alert and attentive, vigorously nodding his head in agreement or shaking it in denial; Hess, with his pale pinched face; von Ribbentrop, always busy writing notes; Keitel and Jodi, the soldiers, staring silently and sullenly ahead; Schacht, the businessman, whose relationship with the Nazis had been more turbulent, and who had distaste etched into his face at having to sit in public with such unpleasant people; von Papen and von Neurath, politicians both but still the diplomats, polished and immaculate. These all stood out. But how unimpressive were Seyss-Inquart, who had betrayed Austria and ruled occupied Holland; Rosenberg and Fritsche, the propagandists; and von Schirach, formerly a fanatical and dangerous young zealot, but now a visibly broken man. For a time, the whole free world had quaked before these men.

Ultimately, however, they had brought not glory, but ruin and misery, to their own land and its people. We had lived in their shadow for a decade, but now history was free to deliver a final verdict upon them. When the court adjourned for a quarter of an hour, I saw the Nazi leaders arguing heatedly among themselves about the evidence they had heard: evidence which had been gathered from every corner of Europe, from the Chancelleries and concentration camps, from the occupied countries and from Germany itself, of how the Nazis plunged the world into war, led Germany to its undoing and brought themselves, at last, into the dock in that Court House in Nuremberg.

On October 7, 1946, Associate Supreme Court Justice Robert Jackson reports to President Truman on the results of the just-concluded Trial: [For the full text, Click here.]

The trial began on November 20,1945 and occupied 216 days of trial time. 33 witnesses were called and examined for the prosecution. 61 witnesses and 19 defendants testified for the defense; 143 additional witnesses gave testimony by interrogatories for the defense. The proceedings were conducted and recorded in four languages--English, German, French, and Russian--and daily transcripts in the language of his choice was provided for each prosecuting staff and all counsel for defendants. The English transcript of the proceedings covers over 17,000 pages. All proceedings were sound-reported in the original language used.

In preparation for the trial over 100,000 captured German documents were screened or examined and about 10,000 were selected for intensive examination as having probable evidentiary value. Of these, about 4,000 were translated into four languages and used, in whole or in part, in the trial as exhibits. Millions of feet of captured moving picture film were examined and over 100,000 feet brought to Nuremberg. Relevant sections were prepared and introduced as exhibits. Over 25,000 captured still photographs were brought to Nuremberg, together with Hitler's personal photographer who took most of them. More than 1,800 were selected and prepared for use as exhibits. The Tribunal, in its judgment, states: "The case, therefore, against the defendants rests in large measure on documents of their own making. ...

It has been well said that this trial is the world's first post mortem examination of a totalitarian regime. In this trial, the Nazis themselves with Machiavellian shamelessness exposed their methods of subverting people's liberties and establishing their dictatorship. The record is a merciless expose of the cruel and sordid methods by which a militant minority seized power, suppressed opposition, set up secret political police and concentration camps. They resorted to legal devices such as "protective custody," which Goering frankly said meant the arrest of people not because they had committed any crime but because of acts it was suspected they might commit if left at liberty. They destroyed all judicial remedies for the citizen and all protections against terrorism. The record discloses the early symptoms of dictatorship and shows that it is only in its incipient stages that it can be brought under control. And the testimony records the German example that the destruction of opposition produces eventual deterioration in the government that does it. By progressive intolerance a dictatorship by its very nature becomes so arbitrary that it cannot tolerate opposition, even when it consists merely of the correction of misinformation or the communication to its highest officers of unwelcome intelligence. It was really the recoil of the Nazi blows at liberty that destroyed the Nazi regime. They struck down freedom of speech and press and other freedoms which pass as ordinary civil rights with us, so thoroughly that not even its highest officers dared to warn the people or the Fuehrer that they were taking the road to destruction. The Nuremberg trial has put that handwriting on the wall for the oppressor as well as the oppressed to read.

Caution: As always, excerpts from trial testimony should not necessarily be mistaken for fact. It should be kept in mind that they are the sometimes-desperate statements of hard-pressed defendants seeking to avoid culpability and shift responsibility from charges that, should they be found guilty, can possibly be punishable by death.

Disclaimer:The Propagander!™ includes diverse and controversial materials—such as excerpts from the writings of racists and anti-Semites—so that its readers can learn the nature and extent of hate and anti-Semitic discourse. It is our sincere belief that only the informed citizen can prevail over the ignorance of Racialist "thought." Far from approving these writings, The Propagander!™ condemns racism in all of its forms and manifestations.

Source Note: The trial portion of this material, which is available in its entirety at the outstanding Avalon and Nizkor sites, is being presented here in a catagorized form for ease of study and is not meant to replace these invaluable and highly recommended sources.

Fair Use Notice: This site—The Propagander!™—may contain copyrighted material the use of which has not always been specifically authorized by the copyright owner. We are making such material available in our efforts to advance understanding of historical, political, human rights, economic, democracy, scientific, environmental, and social justice issues, etc. We believe this constitutes a "fair use" of any such copyrighted material as provided for in section 107 of the US Copyright Law. In accordance with Title 17 U.S.C. Section 107, the material on this site is distributed without profit to those who have expressed a prior interest in receiving the included information for research and educational purposes. If you wish to use copyrighted material from this site for purposes of your own that go beyond 'fair use', you must obtain permission from the copyright owner. 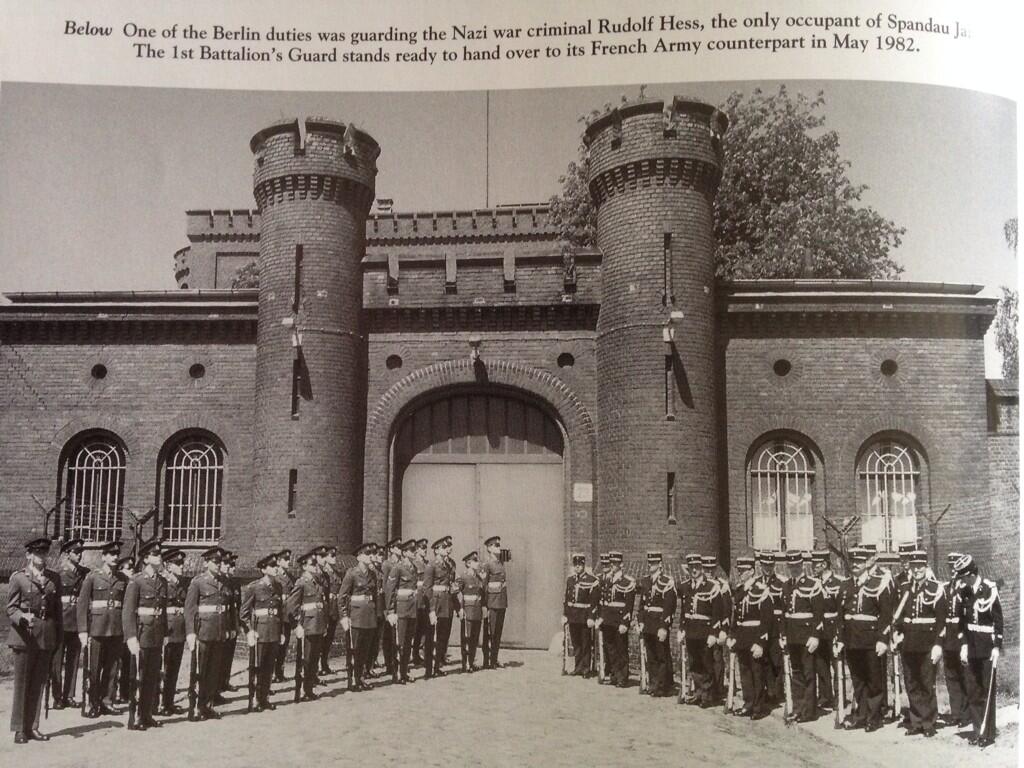